One week to go!

I am back in the smoking room, found a quiet corner and started to type when a super friendly cleaner sat down next to me with a bagel and a massive coke cup and started chatting. I’ve been nice but non responsive in the hope she might go away. Ever been in an empty cinema, and had another person come and sit right beside you? I’m not sure what it’s called but I find that intrusive. I guess we’re all used to a certain amount of space around us, and also maybe even a ‘right’ to space. As we all enter a public space, we usually find a location the furthest distance from others in the room, until eventually there is no choice but to bump into each other. It’s funny when I think about it now. Somehow we are not offended if there is no choice, but the moment a space opens up, we expect everybody to reshuffle to allow maximum space between each other. I’ve heard that people from rural areas are used to even more than those in urban areas. I bet a Japanese family would be fine with this scenario.
…….Ah now she has a chatty friend. Must be breakfast time or something. Ok I admit tht sometimes I am easily irritated, so I’ll try to ignore it.
“Ignore it and it will go away!”….turns out that is sage advice. They left.
Well I haven’t gone through all the material I have created yet, but I have a feeling I have an excess amount, which means I will be able to choose what is included. The question will be whether I am happy with the quality. Somehow I think I will be happy. I’ve checked back on 1 or 2 tracks recently, and was pleasantly surprised that they have a complexity and flavour which satisfies me.
This week I took on 2 new jobs for a ad company I work for back in Aus. They are a multinational company and they need 1 music sting for the UK, and another for Aus. Again I wrestled with the decision to take them on, but frankly they are too profitable, and my relationship with this company is also too important to strain. Granted I’ve never let them down before, but I really am not sure exactly how valuable they perceive me to be. I know a lot of guys who would love to run with some quirky music stings and reap the royalties thereafter. I know my fees are much lower than others, but so are my overheads.
This is a very muddled post today. Despite the way I’m writing, I actually feel quite level headed now. I’m very much at home here, and I am calm about the amount of work I have achieved (I’m yet to “tally” up the results, but as I have already said, I a pretty sure I have plenty to go with!). My wife is also over the hump I think. Her teaching jobs have all gone without a hitch, and we fast approach the assessment period.
This week in Bloomington (and all of Indiana I think) is an event called the “Little 500”. It’s a bike race held here at the uni which is loosely modelled on the Indy 500. It started back in 1951, so a lot of tradition has built up around it. We have seen a lot of posters promoting different riders in our dining hall. Yet another tradition which contributes to the experience which is IU.
Let me digress for a moment… I really like “The Office” TV show, both UK and US versions. The American version has now morphed into something different. The premise that it is a ‘fly on the wall’ documentary has long been betrayed by the number of seasons and development of the characters. They still throw awkward glances to the camera occasionally and have the one-on-one interviews, but then they also film through the front windscreen of a driving car (something a documentary crew can’t do), and film in a maternity ward, and at a private dinner party at the character’s home (something a doc crew wouldn’t do). This brings me to the point which I wanted to make….. Another issue I have had to make peace with regarding the US show, is the sheer number of ‘special’ days, the characters celebrate in the office. ie: casual dress, christmas, fun runs, blood drives etc etc. The ones I list here are reasonable in the real world, but on the show the list is long and increasingly unfeasible. Much the same way that M*A*S*H ended up running longer than the actual Korean war did, The writers of “The Office” seemed to be writing themselves into a crazy, nonsensical corner.
HOWEVER…..I have now learned that here in the USA, there are in face MANY more ‘special’ days than we have in Australia. So while I still think this TV show is challenging reality, it turns out it’s closer to the truth than I thought. I wonder how many other preconceptions I have had about other shows, has affected my opinion of them. 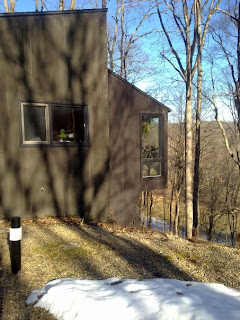 We have been offered the spare room at our friend’s home over the next weekend, due to the “Little 5” which apparently impacts on this place like a tsunami. I’m going to take my studio this time, as I think I will enjoy the silence and view. My wife will probably still need to commute into her Uni studio.
I may really be finished with the composing part of this trip. The next part is refining, mixing and mastering each piece, which I may not get done in the time left here. I don’t mind if this is the case, as I would not mind doing this on my monitor speakers back home.
Oh! News Flash! I forgot to mention that the hail storms that hit Melbourne a month ago, apparently smashed the skylights at the studio! On top of that, the plasterers working next door on the new Hotel fell through the same skylights…..not once, but twice. Freaking idiots! Anyway, the far end of the studios was flooded. Luckily my room is high and dry. They would not have been able to check for me, as I have the only key here with me. The upside to this situation is aparantly the new skylights make the place brighter, and the stinky carpet will need to be replaced. Upgrade!! Hopefully they see fit to re-carpet the entire place. The stairs could do with an overhaul too!
Well I’ve bantered long enough. Those chatty cleaners are long gone, but now a young lady is teaching herself “Jingle Bells” on the grand piano. I guess she’s prepping early!

Our room is still yet to be cleaned, but I am out of stuff to report, so I am signing out now.